John Nicolson was born in Scotland, known as 'Jock' he was an artist, etcher and illustrator for books and periodicals.  He was an associate of the Royal Society of Painter-Etchers and Engravers (A.R.E.).  He was also a member of the R.B.A. and the R.W.S.  He worked for magazines such as The Bystander and Picadilly and worked for the book publishers T.Fisher Unwin.  Nicolson and his wife Dorothy shared a house in south London between 1923-26 with the artist Edmund Blampied and his wife Marianne.  Nicolson died in a traffic accident in London in 1951 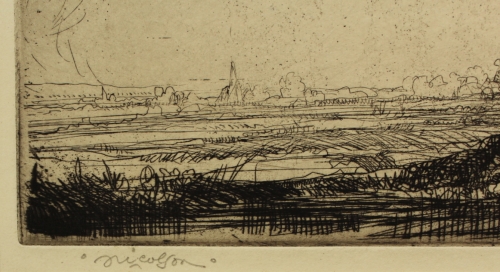